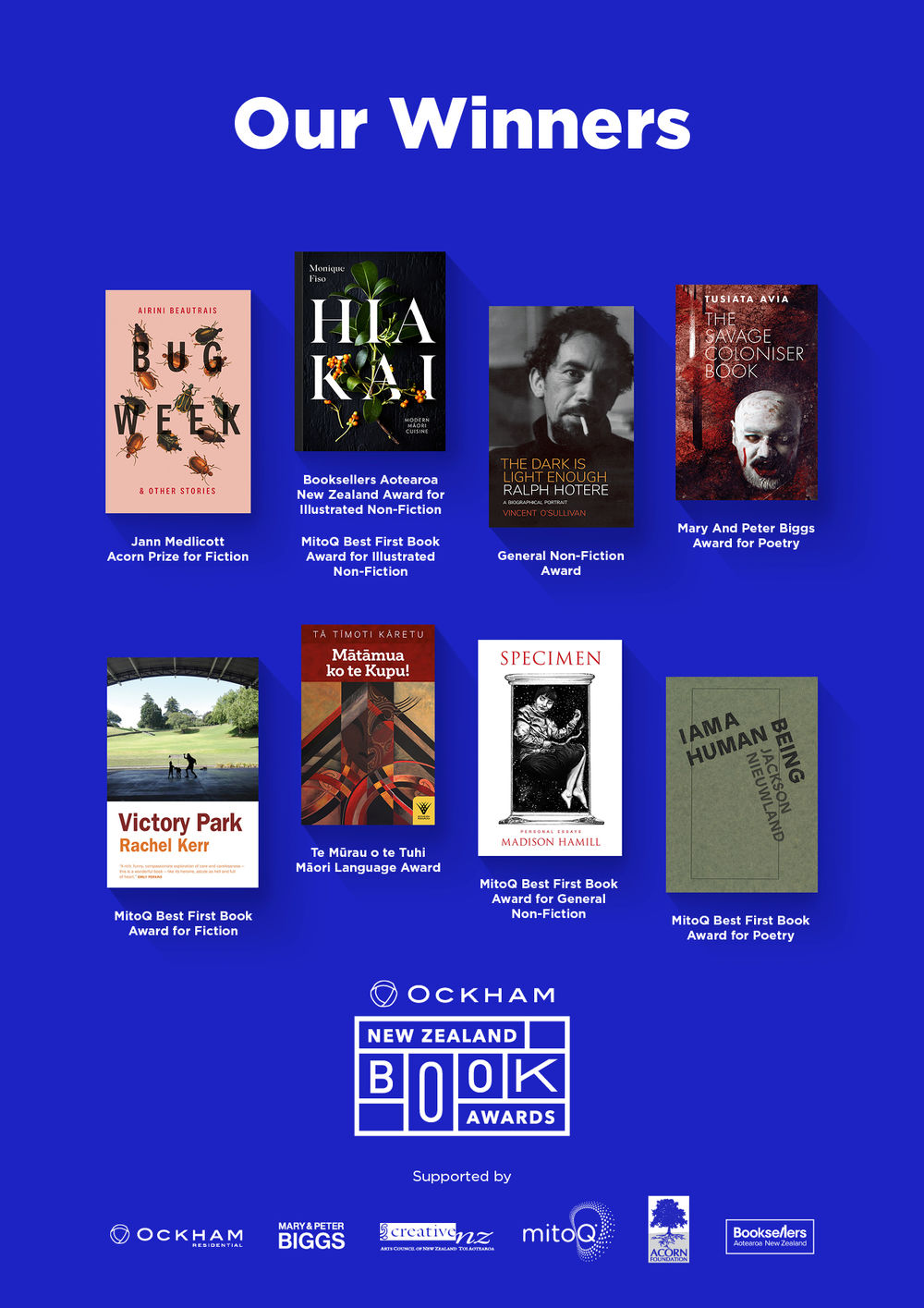 Whanganui writer Airini Beautrais has won the $57,000 Jann Medlicott Acorn Prize for Fiction at the 2021 Ockham New Zealand Book Awards for her book Bug Week – the first person to take out the category for a collection of short stories in more than a decade.

Beautrais is well-known as a poet, but this is her first-ever book of fiction, published by Victoria University Press. She received the prize ahead of acclaimed novelists Catherine Chidgey and Pip Adam, both previous winners, and Brannavan Gnanalingam, shortlisted for the fiction prize in 2018. The awards ceremony, emcee’d by Jack Tame, was an Auckland Writers Festival marquee event held in the Aotea Centre this evening.

The Fiction category’s convenor of judges, Kiran Dass, says Bug Week is a knockout from start to finish.

“Casting a devastating and witty eye on humanity at its most fallible and wonky, this is a tightly-wound and remarkably assured collection. Atmospheric and refined, these stories evoke a strong sense of quiet unease, slow burning rage and the absurdly comic.”

The Awards’ guest international fiction co-judge, award-winning American novelist Tommy Orange says, “I was consistently surprised by sentences, the beauty and singular language. If the book were a bug, it would be a big one, with teeth and venom, with wings and a surprising heart, possibly several, beating on every page with life."

One of this country’s most respected writers, Dunedin’s Vincent O’Sullivan, won the General Non-Fiction Award for his work, The Dark is Light Enough: Ralph Hotere A Biographical Portrait (Penguin Random House NZ).

“This is a sensitive, detailed portrait of one of Aotearoa New Zealand’s most important modern artists, shaped around the four pou of Hotere’s identity: his Māoritanga, his faith, his whenua, and his whānau. The judges would like to commend Vincent O’Sullivan for an extraordinary achievement in biography.”

Celebrated Christchurch poet Tusiata Avia won the Mary and Peter Biggs Award for Poetry for her collection The Savage Coloniser Book (Victoria University Press). She is the first Pasifika woman ever to win this award.

“The violence of shared and fractured histories surfaces throughout the collection like liquefaction, unsettling, displacing, disrupting. The poet’s experience of hospitalisation and seizures likewise overflows, mingling with the ancient arts of spiritual possession to inspire contemporary outpourings.

“In a year of outstanding poetry publications that respond to Covid, Black Lives Matter, the Christchurch Massacre, and ongoing violence against women, she expresses the outrage shared by many, while maintaining faith that love helps the healing process. It’s a book bursting with alofa, profound pantoums, profanity and FafSwaggering stances, garrulously funny, bleakly satirical, magnificent.”

“The recipes in Monique Fiso’s first, extraordinary book occupy fewer than half of its pages. The rest is a tour de force of Māori knowledge, written from a Māori perspective.

“For many of us this will be our introduction to the indigenous cuisine of our own land, and its ingredients, practice, culture, history and knowledge. Monique Fiso’s text is hard-won, inspiring and utterly original in scope; the book is also beautifully designed and photographed,” says category convenor of judges Dale Cousens.

"Lyric is paramount! Thisis the axiom of Sir Dr Tīmoti Kāretu, and there is no other than he who best personifies this statement in all his labours for the Māori language overcountless years.

“His efforts for te reo in traditional Māori performing arts are also recounted in his book, his views and knowledge informed by his journey in that realm as a performer, a composer, a tutor and a judge. We are fortunate that his reflections are encapsulated in his own words in the Māori language with such passion and candour."

The Jessie Mackay Prize for a best first book of Poetry: I Am a Human Being by Jackson Nieuwland (Compound Press).

Each MitoQ Best First Book Award winner received $2,500 and a 12-month membership subscription to the New Zealand Society of Authors.

“This is a year of happy surprises and well-deserved recognition, from big names like O’Sullivan and Hotere to international stars like Monique Fiso, from a long-awaited award for Tusiata Avia to a major accolade for Airini Beautrais’ first work of fiction. The variety of publishers represented here also suggests the good health and high quality of our local industry,” says Paula Morris, a trustee of the New Zealand Book Awards Trust, which governs the Ockham New Zealand Book Awards.